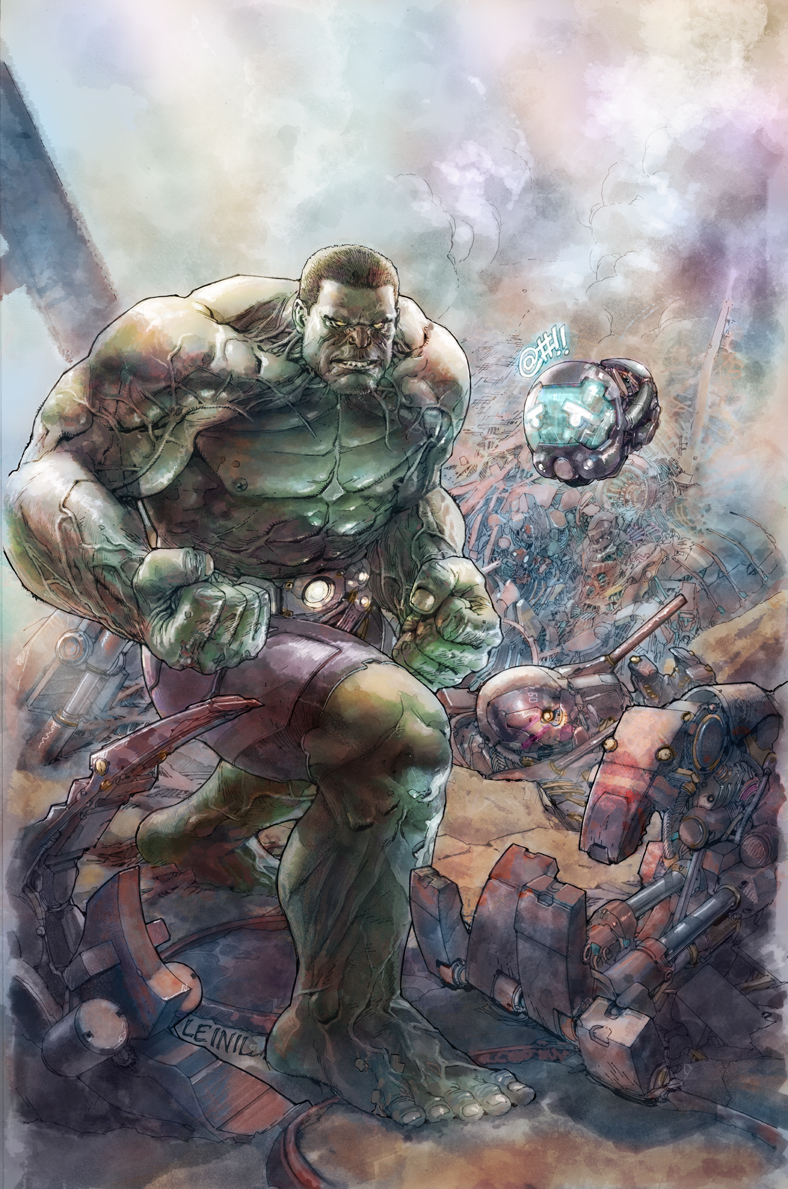 Marvel’s jade giant gets a brand new #1 thanks to Marvel NOW!, and the result is one of the best books from the relaunch so far.  Penned by Daredevil‘s Mark Waid and drawn by Superior‘s Lienil Yu, Indestructible Hulk finds Bruce Banner on the run yet again, but with a new lease on life. What follows is one of the most fun comics I’ve read this year, and an superb introductory issue to a new era in the Hulk’s story.

The strongest selling point of this issue is Banner’s new outlook on life. Meeting with S.H.I.E.L.D. director Maria Hill in a dingy diner, he tells her he’s had an “epiphany”. Not wanting to be outdone by the likes of Tony Stark and Reed Richards, Banner makes Hill an offer: give him all of the resources he needs to help the world with his genius, and in return, they can use the Hulk on missions that would be too dangerous for regular agents. It’s a premise that so good and so simple that I’m amazed no one has thought of it before Mark Waid. After a “trial run”, Banner is accepted to into S.H.I.E.L.D., and the wait for issue two is on.

While Waid’s script and characterizations of Banner and Hill are spectacular, this book wouldn’t be nearly as good as it is without Yu’s pencils. Effectively working with Waid’s script, Yu’s art in the early moments of the issue build up the tension that one would feel sitting across the table from what Hill describes as an “Atomic bomb”.  Once we finally get to see the Hulk in action, it’s an effective release that leaves you in awe, reminding you just how power Hulk is. Yu really shines in these moments, and his two page splash revealing the Hulk with some S.H.I.E.L.D. agents behind him is one of the best pages of the year.

Indestructible Hulk was a sure bet comic coming from Waid. I just didn’t realize how good it was. Fans of Hulk’s appearance in The Avengers should definitely pick this bad boy up. This is how you create comics for people coming out of the multiplexes: place them in easily accessible situations with great writers and artists. While it may be a little early in the game to say it just yet, all signs point to Waid working the same magic he did on Daredevil will be used here.

With any big event that has multiple tie-ins, there’s bound to be some that just suck. Unfortunately, the latest “Death Of The Family” tie-in, Catwoman, fits into this category. I’ve only read the first two issues of this series (aside from last month’s #13), so there’s a lot of background info I’m missing, but man, this was just not good.

The gist of the issue is that The Joker starts tormenting Selina Kyle in order to convince her she’s not “good enough for Batman”. That’s really all you need to know. Mr. J torments Selina in numerous ways, but there’s just something off about the way he’s going about it. From calling Catwoman “Catface” to making her take off her costume and put on a new “skin”, Anne Nocenti’s take on Joker just isn’t for me. There’s also a lot of confusing jumps in time and flashbacks, which made the whole issue a chore to read.

Rafa Sandoval handles the art, and while his characters look good, his take on Joker’s “new look” leaves a lot be desired. Instead of a horrifying piece of rotting flesh attached to his face, Joker instead looks like he took a page from Hush’s fashion book and wrapped his face in bandages. This whole issue felt like something neither the writer or the artist wanted any part in, and completed it because editorial forced them to. As one of the first “DOTF” tie-ins out, it’s a shame that this one was such a bummer.

Mark Waid (again!) and Chris Samnee close out their tale of The Rocketeer vs. Dinosaurs in Los Angeles. If that sentence doesn’t make you want to drive to your local LCS and pick it up, then I don’t know what else to tell you. Cargo of Doom has been a fun ride that fit right in with the tone of the original Dave Stevens’ Rocketeer series, and my hope is that this isn’t the last time this creative team gets to take Cliff Secord into the air.

With the dinosaurs on the loose, Cliff takes them all head on, armed only with the special disintegration gun that he stole off a goon last issue. There are plenty of awesome action moments in this issue, even if it seems like Cliff takes out the dinos relatively easily. What matters more here is the (once again) great character work by Waid, who this week solidifies himself as one of the most versatile writers in comics today. Creating a new story for a well-known cult character is a daunting task, yet Waid handled it beautifully.

Speaking of beautifully, just flip through some of Samnee’s art. Go ahead, I’ll wait. Wasn’t it great? His style so expertly fits the tone of what a Rocketeer story should be that I wish he could draw every story from here on out. From whipping through LA fighting dinosaurs to scenes with Cliff and Betty taking a breather and sharing a milkshake at the diner, Samnee really brings it with this series.

While the main conflict was wrapped up a little too neatly, The Rocketeer: Cargo of Doom was still a great story for fans of the character, whether you know him from his comics or the Disney film. While this miniseries is over, thankfully IDW has more adventures for Cliff Secord planned in 2013.  I know I, for one, will be there.