Six years ago, a Japanese web comic artist going by the pseudonym “One” started a self-published series called One-Punch Man, and it was a resounding success. Drawn, written, and published completely by himself on his own site, the series was getting tens of thousands of hits a day, and for good reason. It’s a story that, despite its simplicity, is hard to put down.

It wasn’t long before the manga industry took notice, and Eyeshield 21 mangaka (manga author) Yūsuke Murata saw something in One’s story. Now the two are working together on a manga remake, with an anime adaptation coming in the fall. That’s amazing news, but why should you care? Good question, internet. Here’s why.

Before I start shoving this in your face and continuing to do so until its premiere, it’s probably best to get a bit more familiar with One-Punch Man’s general ideas. I am by no means an expert; I am simply a fan caught up in the euphoria this series brings. I’m sharing this with you in the hope of getting you hyped for this fantastic action series.

One-Punch Man is the story of Saitama, a young man who was, for lack of better exposition on my part (and to save you some time), simply bored of being a salaryman, saved a child, and dedicated the rest of his life to being a hero. Adopting a rather unorthodox, almost suicidal training regiment, Saitama reached an incomparable level, losing all of his hair, but can defeat any being with one punch, hence the title. On a base level of “can defeat anything or anyone with one punch,” I can hear your eyebrows rising, but really, it works as a plot device, I promise. I myself was curious as to how the battles would work if the main hero was just too powerful, but when you begin reading, it will all make sense. 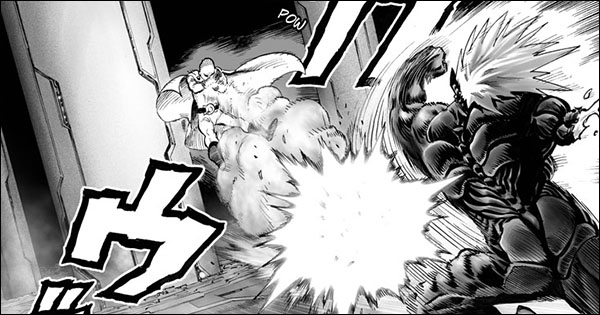 Saitama’s journey through unemployment, training, and world saving will is an epic journey you will not be able to step away from, and the story brings in several other protagonists and antagonists to diversify itself. Currently, the manga remake is at a paltry 47 chapters (as of this writing), but the detailed art and well thought-out storytelling is what keeps you coming back. Most chapters are a scant 20 pages, but it can tell a complete battle in that short amount of time. The intricate detail of fights and characters, the scale of the enemies, and the general resiliency of many of the characters are all captivating.

It also helps that Saitama’s personality is about as dry and apathetic as you wouldn’t expect from a hero. Nearly every other character inhabiting One-Punch Man is emoting when something otherworldly or unexplainable happens, but Saitama usually sits there deadpan, playing video games. He’s the perfect hero, in that he’s never let the praise or usual pride that come with saving the world go to his bald head. He could be so much more than he currently is, but he’s content just getting by and doing the minimum requirement. It’s rather refreshing to the genre, and builds his character and the comedy well.

In regards to the action, One-Punch Man is not only an homage to shonen like Dragon Ball Z, but also pokes fun at it at the same time. It’s comedy plus action plus parody plus sci-fi, and it’s brilliant. It will certainly be interesting to see if it transfers well to animation, but I expect at least the battles to be well done. Luckily, we have the powerhouse animation studio Madhouse (Hunter x Hunter, Trigun) at the helm, with Shingo Natsume (Space Dandy) directing.

If you’re even remotely familiar with shonen anime like DBZ, or more recent fair like Kill la Kill, One-Punch Man is the series for you. You can read the original web-toon online via One’s personal website, and Shonen Jump offers the translated digital version on their site. My personal preferred reading app, Manga Rock on iOS or Android (pay the one-time fee of $3 to remove the ads — you’ll thank me), has all of One-Punch Man and tons of other web-hosted manga series too. One-Punch Man is a force ready to rock your eyes, and come October, more and more anime fans will be talking up its over-the-top action and genre-skewing antics!