Looking back to 2016, whether in anime or in the real world, there was a lot of shit to wade through. Politics, Kiznaiver, Terra Formars Revenge, Harambe, memes, election results; whatever it was, 2016 kind of sucked. Luckily Studio MAPPA came through by the year’s end and delivered on one of the biggest surprises with Yuri!!! on Ice. A seemingly straightforward ice skating anime soon took the anime world by storm with its characters and story, and I just want to praise and protect it from anything bad out there 2017 may bring, so let’s do this!

Yuri!!! on Ice focuses mainly on Yuri Katsuki and his career as a figure skater. A disillusioned, saddened-by-defeat college student, Yuri travels the world and returns home to Japan ready to hang up his skates for good. During a playful exhibition of another skater’s routine, which his friend records and uploads to the web, Yuri is soon thrust back in the figure skating world. Additionally this opens up a completely new world of emotions and feelings when Yuri meets his new coach Viktor Nikiforov. Now this all sounds quite by-the-books in regards to a slice-of-life/sports anime, but the true charm comes from Yuri and Viktor’s budding relationship, as well as the remaining cast of rivals, friends, and family. Yuri is instantly amiable and a character nearly any viewer can connect with and root for. 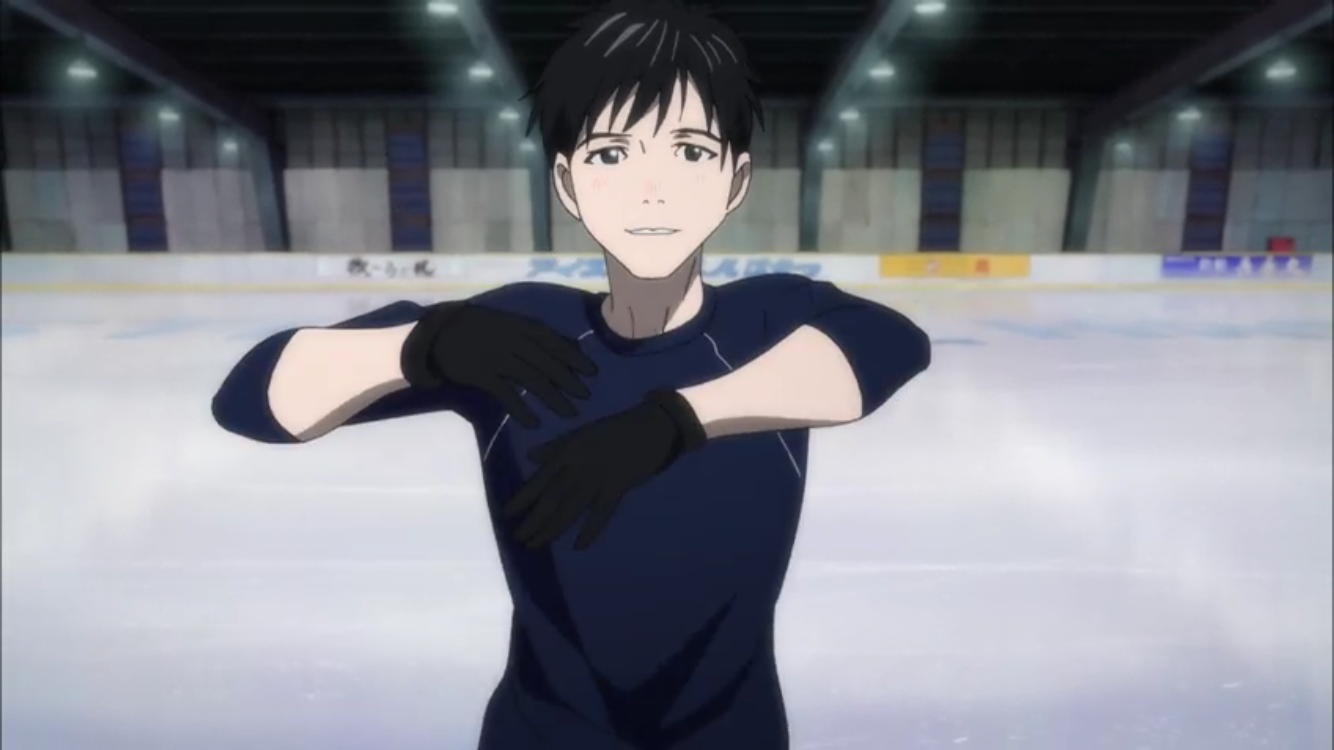 Yuri’s a beacon of the “everyman”, but with a lot under the surface the series can pull out of him. He’s not a particularly ‘excellent’ skater, he’s just rife with stamina and capable of forcing himself to train to get better and get back in the rankings to please Viktor. Viktor on the other hand is almost an enigma himself. He seemingly and continuously goes out of his way to assist Yuri with his return to figure skating, wanting so bad to see him succeed. Viktor puts his own career on hold to do this, and we’re hooked now, wondering what the motivation is. I won’t spoil the later episodes, but if you’re watching this, you’ve likely already learned a fair bit about Yuri!!! on Ice at this point. I’ll try and tip-toe around the finer plot-driven points (because I truly believe this is a must-see show of the last 10 years in anime) but Yuri!!! on Ice is an amazing gay show.

I’ll use ‘gay’ in both definitions here: it’s homosexually driven, and it’s a bright, happy, cheery show. Yuri and Viktor’s relationship is one that is so believably delivered and developed that by the series end, you’re figuratively weeping with glee that this story was even told. A lot of times in anime, you’ll see terms like OTP and ‘character x character’ fanfics. It’s just something we in the ether of anime have come to expect. A lot of fans and viewers often have their expectations and desires for certain series’ characters to bone, but Yuri!!! on Ice is essentially fan fiction done well. The fantastical and exotic moments are left on the cutting room floor and present a more grounded, plausible depiction of relationships. Every relationship in Yuri!!! on Ice is completely believable and that’s a huge kudos, especially for an anime. Tropes are left at the door as there are no major clichéd ideals and tired displays of straight, bi, gay, or any of the LGBTQ spectrum on display. Yuri!!! on Ice displays love, no matter the facet, in a completely judgement-free portrayal. There’s no underlying subplot of bigotry and criticism, and it’s so refreshing. I’ve come to expect this ideal from a lot of US shows (although it’s still a bit of a pain to get a gay character through a show with a little controversy from viewers or fans), but for Japan to present such a story with zero repercussions is astoundingly cool.

But on the other hand I’ve seen several other decrying Yuri!!! on Ice’s depiction as still “playing it safe” in terms of its subtle presentation, and while I may concede they’re not wrong in the criticisms, I can forgive it given that this is still relatively unfamiliar territory for anime. I get that representation is important, I get that you want vindication, you want to be heard, you want to be seen and heard; I truly, truly get that, I want that same vindication too. I want to be in a world where I can walk down the street with my boyfriend and never, ever be in fear of criticism or anything harmful. I want to be able to do even the most minor or PDA in a public space and not have to check before AND after doing so to see if anyone saw and might say or do something to either of us. It’s scary sometimes almost being under a proverbial spyglass while straight couples can do what I simply want to do too with no derision.

When it comes to my preference in media, I’m not someone who needs or even often wants media to connect the dots and spell it out for me. I’m very happy with a subtle declaration versus an outright, bombastic explosion of exposition. Yuri!!! on Ice could have certainly handled its subject matter in a more in your face manner, but for this particular viewer, less is more in the grand scheme. I knew next-to-nothing before even starting Yuri!!! on Ice, and then when all of the gay subplot starts entering the fray, I was hooked even harder into an already enjoyable skating anime of retribution and self-improvement. Look, I am STOKED that an anime of a gay couple was a huge hit and has been doing well in home media sales, and I am so happy to be able to share my thoughts and celebrate the ideas and storytelling; praising the mere thought that writer Mitsurō Kubo was able to tell her love story. The detractors and those unhappy that is was still a BIT vague in the end are totally entitled to their opinions and thoughts also, but I truly do not believe that it weakens the show, nor affects its overall enjoyment or impact. Let’s be happy this show was able to be aired, has been a success, and what the future holds for gay content in anime going forward. We all need a starting point, a stepping stone, and I truly believe that Yuri!!! on Ice is the perfect introductory show for those who need it. The kid wondering why they’re maybe a bit different, why they have certain feelings for someone of the same sex, whatever it may be, and this show can be a axiomatic understanding and revelation for them, and we shouldn’t shoot it down because of a fickle, personal unpleasantness. 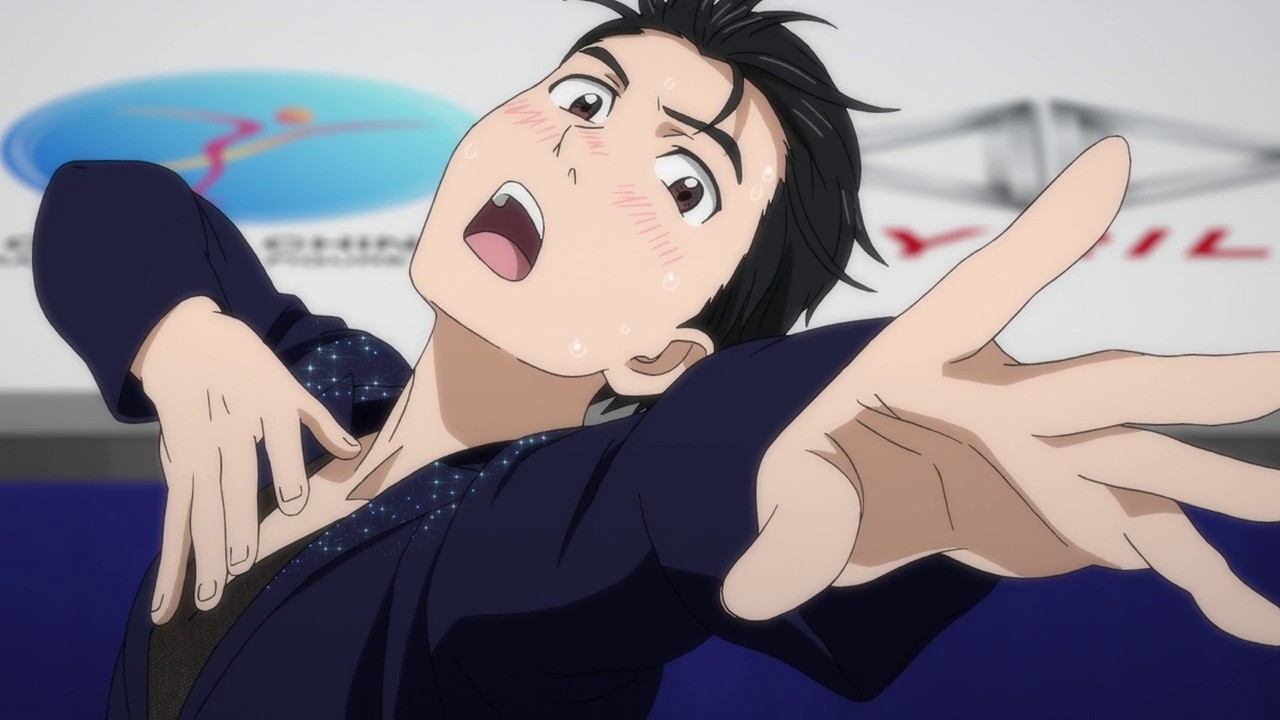 You can tear Yuri!!! on Ice apart for several reasons regarding its animation at times, perhaps there are too many characters that it may bog down some moments, whatever. But, Yuri!!! on Ice should not be criticized wholly on how it handled its subject matter. Then again, just because it is a ‘progressive’ show doesn’t excuse it from criticism. I do think there are times where there may be too many characters in the mix that can disrupt the flow of several scenes. I also think the animation falters quite a bit, but I understand that the industry is often on a razor this budget with most shows, so I can forgive the occasionally janky animation. I think it handled it well and left me satisfied despite whether or not we ever step back in to the rink with Yuri and Viktor.’

Yuri!!! on Ice can be streamed via Crunchyroll (subbed) or via Funimation (dubbed).