Netflix has dipped its toes into the anime streaming territory, and one of the bigger series they’ve nabbed is Gamon Sakurai’s Ajin: Demi-Human. Does this “Netflix Original” series gain anime immortality, or should it be locked in the cryogenic vault and never freed?

In a world of sunshine and rainbows, there is always a counterpoint to the glad and happy, often gloom and doom. That’s where a series Ajin: Demi-Human fits in the big picture. Empathy, betrayal, distrust, self-restraint, violence; these are all general themes of Ajin, and mangaka Gamon Sakurai is never light on throwing them into the mix. Sakurai’s manga tends to explore these themes and more en masse and rarely showcases anything but. Whether it’s due to the seinen demographic it’s aiming for or simply the machinations of Sakurai’s view on the world, Ajin can be a rather brutal series to stick with. Thankfully for those who stick around for the story will find a wonderfully-paced thriller with terrific characterization throughout.

Ajin is based in modern Japan wherein immortal, ghost like creatures, the titular Ajin, have been slowly revealing themselves over the last 17 years. Kei Nagai is one such ‘abomination’ and is now on the run to protect himself and those around him he considers important. The ugly light of discrimination is cast on any and all Ajin and the world seeks to find them and eradicate them by any means. Naturally humans do not wish to be cast off of the top of the proverbial pyramid and happily and discreetly treat the Ajin as nothing more than weapons that can easily put them out of existence. The Japanese government has assembled a certain taskforce for this duty: the Ajin Commission. Headed by Yū Tosaki, the Ajin Commission is tasked with capturing Ajin and ensuring the safety of humanity. Naturally, it wouldn’t be a good thriller without a bit of conflict or intrigue, so it’s not before the Ajin Commission and the Japanese government are discovered to be corrupt and treating the Ajin less that humanizing. Everything from running diabolical tests to learn all about an Ajin’s strengths and weaknesses, to even torturing and learning one’s limits is all considered A-Okay for the commission, and that’s where our third thread of Ajin comes in to play: Satō. Satō’s introduction really helps launch Ajin into a new level of thriller and action as he’s absolutely ruthless when getting things done by any means necessary. This is where I must preface a bit about Ajin’s actual animation that can be a huge turnoff to a lot of viewers. Look, there is no denying that the animation studio Polygon Pictures have a distinctive style with their series in the last few years. They really push CG anime, and they’re good at it, but their trademark art style brings a discussion to the industry of “CG versus 2D” that ultimately will never be won. It’s obviously strictly an aesthetically pleasing preference, and so no one is necessarily wrong for liking one over the other. That being said, I personally prefer the ‘traditional’ 2D animation that’s found more prominently in the industry than most CG animation out there. That’s not to say I don’t enjoy CG animation, or even think that it’s something that should go away. I actually think that it can be used super well to accentuate scenes and emotions that some 2D animation cannot. When used in conjunction, the two styles can blend really well together. The personal frustration I have with Polygon Pictures’ style is that it just looks so old and dated. It essentially looks like a PS2-era cutscene most times. Characters move at an awkward pace and speed 90% of the time, and despite character’s emotive reactions and faces, they’re not enough to forgive the animation. I’m not a fan of watching anime moving at seemingly 15 FPS, and it’s simply very jarring and thus it has caused many, including myself until recently, to outright pass on it almost immediately.

Of course, animation isn’t 100% of the entire product, and I’d be wrong if I said I never watched some shows which have subjectively been declared “ugly” by others in the past. That being said, there really is some beauty in the ugliness with Ajin within its story and characters, especially Nagai and Satō. Sakurai’s Ajin has really hit on a great subject of civility and humanity and empathy. All three weave a web of story that pulls you through a funnel of prejudices, conspiracy, torture, betrayal, battlegrounds, and realization. Nagai’s complexity is slowly pulled out of him brilliantly over the course of the series as he has to come to terms of being an Ajin and everything that entails. His life is completely changed, and all he really wants is to lead a quiet, normal life free of any stigma or worry. He cannot understand why society refuses to even consider the potentially positive possibilities of Ajin, and why they’re so quick to be rid of anyone labeled and found as one. Nagai’s also not a reputable protagonist by any means; he’s a dick, only looking out for himself a majority of the series. He has moments of good and praise-worthy choices, but they’re often few and far between. It’s a bit of a typical character arc, but it’s spread out so well over the series, it’s less predictable and more enjoyable as a result. Whereas when get to Satō and his character, it’s essentially what Nagai will become if his mentality continues on its existing route. Nagai does have shred of empathy and humanity still inside of him, but Satō is as chaotically evil as you could imagine. He has zero qualms about getting his tasks completed despite the challenge and moral or ethical implications cast upon them. He’s the perfect villain to hate and root against, it’s such an invigorating character type to see onscreen once again. A fair number of series still insist on making their villains troubled persons with still credible and redeemable quirks that they may recover from, but Satō’s nowhere close to being redeemable. Yes, there are a few points and ideas I may be able to comprehend as logical and potentially fair, but there’s little in ways of actually condoning how he doles out justice to his enemies. He’s completely despicable and will kill his enemies and even comrades at a moment’s notice to succeed, it’s terrific! Satō is one of the best, most creative villains I’ve come across in many years, and he will be a memorable character and important measuring point for anything to come after him. 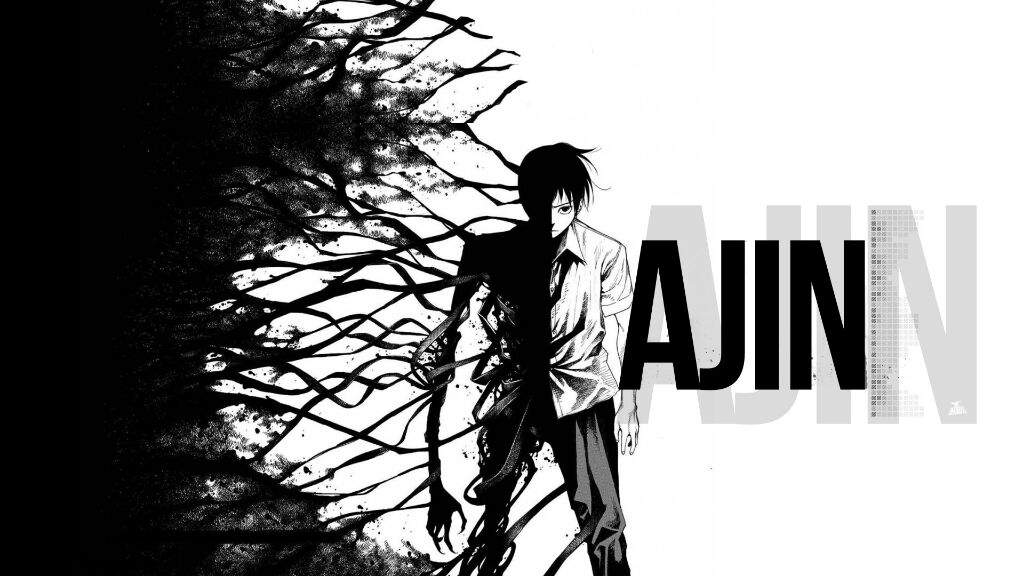 Nagai and Satō’s dynamic is perfect for a bulk of the series, and their inevitable showdown(s) are a sight to behold. They’re both incredibly talented in terms of strategy and manipulation, but the matter of age and experience often plays in, and Sakurai is dazzling at allowing the antagonist to win many battles against his protagonist, and I adore seeing the ‘hero’ lose so often. There are too many instances I’ve read or watched where the hero prevails because of the power of friendship, or a last minute power-up, or there is some unexplained deus ex machina that sweeps in and allows them to easily overcome defeat. Ajin is never afraid to show loss and the effects of it. Nagai gets knocked down over and over and over again, while Satō is an unstoppable killing madman. Each gets their spotlight and stories told while keeping a tale stirring to its finale. Speaking of the finale, Ajin does unfortunately succumb to the ‘anime-only’ ending, since the manga is still running in addition to the anime airing. Luckily the team crafted a solid ending that will suffice for anime-only viewers. Ajin is a triumphant series worth streaming and spending time with. Netflix has exclusive streaming rights, and it’s fully dubbed or subbed depending on your preference. I personally watched it dubbed, and I had zero regrets about it, the cast were all wonderful, especially Pete Sepenuk as Satō. His gravelly portrayal reminded me of Steven Blum or David Hayter. Ajin is a briskly paced look at humanity and often dreary and dark prejudices found within. If you can get past its art style and potentially objectionable violence/content there is a fantastic story with rich characters within. I plan on personally continuing the story via the manga for more, but those who stick strictly to anime interpretations will not leave Ajin disappointed.